HRG Market Boise, ID Ranks As 2022’s Most Promising City In The U.S. 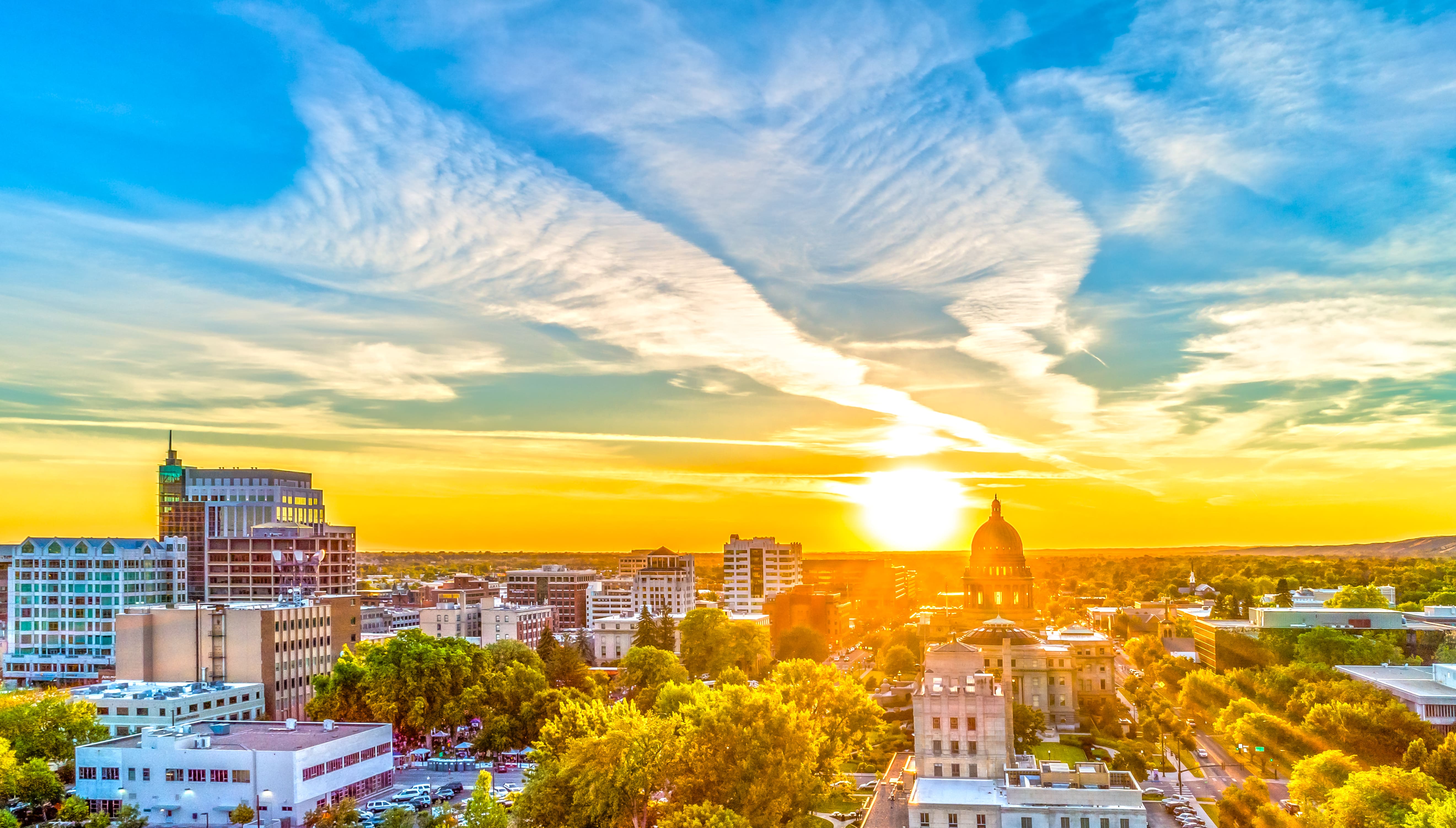 One may imagine a list of the typical suspects when examining cities with significant potential — a huge, busy metropolis like New York and California. However, since 2020, there has been a shift. Priorities have altered, and many businesses have begun to embrace remote employment, prompting many people to reconsider their existing living arrangements. It’s no surprise then, that Idaho, fondly called The Gem State, has become the real estate gem of 2022. In a new study by Rocket Homes, listing the most promising cities for 2022, Idaho cities didn’t rank once or twice but four times. From snow-capped mountains to stunning lakes, Idaho has risen in desirability the past few years, with Boise becoming Idaho’s crown jewel.

Boise offers similar recreational opportunities for nature lovers and ardent hikers who like California's natural and picturesque amenities. Many of the same fantastic attractions found in big cities can be found in Boise, including strong music, theater, and art scenes, as well as the popular Boise State Broncos games and an astounding assortment of unusual and delectable culinary alternatives.

The four Idaho cities that made the list are:

Get more details on why these Idaho cities made the list and the other cities that qualified below.

For job and high-tech GDP growth, Boise rated higher than 90% of the country, and it had among of the lowest unemployment and property crime rates among the metro areas on this list. These encouraging figures, along with the city's population growth over the previous two decades, explain why Boise is in the top 1% of the country for one-year home appreciation. Home prices in the neighborhood have risen 45% in the last year. Idaho's capital city is just one of several areas that have helped the state become one of the best property markets in the country.

Provo has a better employment rate than 99% of the country, with an unemployment rate of just 2.5% - less than half the national average. This might be attributed to the influx of IT businesses into the area, which has experienced a 54% increase in high-tech GDP. Provo's metro region has been dubbed "Silicon Slopes," a reference to Silicon Valley's new digital core, with the added bonus of adjacent ski resorts like Sundance and Deer Valley.

In terms of the number of individuals moving, Coeur d'Alene is in the top 2% of the country. The city had a net migration of around 3% in 2020. Many newcomers may be looking for more inexpensive housing, more space, a higher quality of life, and, of course, work prospects. Over the past year, Coeur d'Alene has had greater increase in available employment than 96% of the country.

Naples is among the top 5% in the country in terms of net migration in 2020, with a 2.09% rise. The majority of that movement isn't coming from the Northeast and Midwest, which have hard winters and higher income taxes. Instead, there's been an unexpected influx of purchasers from California. Despite the fact that property prices in Naples have increased by 28% in the last year, they remain inexpensive when compared to California real estate.

Job seekers can find plenty of chances in Idaho Falls, where job growth is above the national average. Salaries have also risen. The Idaho Falls employment market has had a 6% gain in salaries over the previous three years, placing it in the top 12% of the country for income growth. Idaho Falls has a low cost of living, which is 12.3% lower than the national average, so inhabitants may be able to stretch their money a little farther.

Bend's house prices have risen by more than 40% in the last year as a result of an inflow of retirees, young professionals, and individuals wishing to live in more rural places. With a current median house price of roughly $634,200, the mountain town is in the top 1% of the country for one-year home appreciation. Home sales are expected to stay robust for the rest of 2021 and well into 2022, despite constrained availability (another cause for rising home prices).

For years, St. George has seen a large increase in accessible work possibilities, with employment increasing by 9.9% in the previous year. This places the city in the top 1% of the country in terms of job growth. The city isn't planning to slow down with the construction of the new TechRidge center, a 100-acre multiuse project. In fact, with 3 million square feet of office space, this new building has the potential to make St. George the next innovation hotspot. It's no wonder that the area's net migration (also in the top 1% of the country) is so high, given its rapid expansion.

Austin houses appreciated about 45% in a year, outperforming 99% of the country. Austin is also ranked in the top ten percent of American cities for culture, with more than half of the population identifying as Hispanic, Latino, Black, Asian, Native American, or two or more races. Famous music festivals such as South by Southwest, Austin City Limits, and Pachanga Presents are held in the "Live Music Capital of the World."

The city of Ogden, which today manufactures jet engines, airbags, and carbon fiber bike wheels, refers to itself as a "community of creators." As a result, it takes pride in its small companies and seeks to encourage its entrepreneurial inhabitants. Over the previous three years, the city has ranked in the top 14% of the country in terms of small company growth.

Raleigh had a net migration rate that was over 92% greater than the rest of the country in 2020. Raleigh, which is home to three top-tier colleges attracts young professionals and academics from all over the world who want to work and learn in a safer atmosphere than many other metro regions. Raleigh's violent crime rate, which was formerly far higher than the national average, has drastically decreased during the previous two decades. The capital of North Carolina currently has a lower violent crime rate than 90% of the country.

The Fort Walton Beach metro region has seen earnings rise by more than 6% in the previous several years, placing it in the top 15% of the country for wage growth. And there are lots of ways to put that additional money to good use. Fort Walton Beach, with its white sand beaches and retail, arts, and entertainment areas, has more facilities than 98% of American cities.

Bellingham, a seaside town with a high level of appeal, is in the top 5% of places to visit for recreation. There's much to do on land and sea, with many beaches flanking the shoreline, the North Cascades, and an active glacier-covered volcano. Bellingham is also in the top 10% in the country for amenities, thanks to its diverse range of options, which includes everything from restaurants, wineries, and golf courses to museums, historical sites, and municipal parks. Every month, the city holds a number of festivals, parades, races, and fairs.

Pocatello is a minor town when compared to the others on our list in terms of population. However, when it comes to small business growth, the city outperforms the others, with an increase of 0.88%. When it comes to the survival and success of small enterprises in the region, Pocatello ranks in the top 8% in the country. Simultaneously, the city is in the top 5% of cities in terms of high-tech GDP growth. Entrepreneurs in the IT industry should pay attention.

Missoula ranks in the top 2% of the country for one-year home appreciation, with real estate values rising 36.3% in the previous year. Homebuyers should expect to pay roughly $459,400 for a median property. In addition, the metro region offers greater facilities and leisure possibilities than 90% of the country, making it a promising location for year-round quality of life. The city has three local rivers, more than 100 miles of hiking and bike paths, and its own ski slope with 900 acres of snowy terrain.

Another city with a good quality of life is Portland, which rates in the top 20% of the country for cultural offerings and walkability, as well as the top 5% for facilities and recreational options. Portland receives a high score for desirability as a result of these characteristics, allowing it to edge out other cities for a position on our list. Residents can relax while taking advantage of everything the city has to offer, knowing that it is safer than 99% of the country in terms of violent crime.